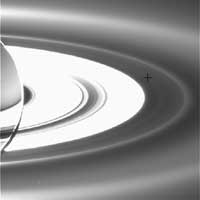 Saturn sports a new ring in an image taken by NASA's Cassini spacecraft on Sunday, Sept. 17, during a one-of-a-kind observation. Other spectacular sights captured by Cassini's cameras include wispy fingers of icy material stretching out tens of thousands of kilometers from the active moon, Enceladus, and a cameo color appearance by planet Earth.

It seems like the TV show that never dies. Forty years ago a science fiction show debuted on television with a paltry budget and a bold mission to go where no one had gone before.

SMART-1 crash landing on the moon 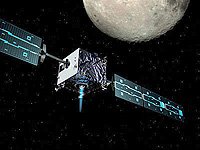 No this was not by accident but planned. The European Space Agency's SMART-1 spacecraft impacted the moon on September 2 at 10:42 PM PDT (5:42 UT, September 3).

Detailed images of before impact and after can be seen at the ESA SMART-1 website.